Interfaces matter. Doug Engelbart taped a brick to a pencil to prove it. 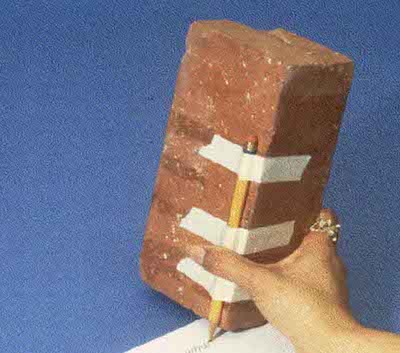 The Whorfian hypothesis states that "the world view of a culture is limited by the structure of the language which that culture uses." But there seems to be another factor to consider in the evolution of language and human reasoning ability. We offer the following hypothesis, which is related to the Whorfian hypothesis: Both the language used by a culture, and the capability for effective intellectual activity are directly affected during their evolution by the means by which individuals control the external manipulation of symbols. (For identification, we will refer to this as the Neo-Whorfian hypothesis.)

Brains of power equal to ours could have evolved in an environment where the combination of artifact materials and muscle strengths were so scaled that the neatest scribing tool (equivalent to a pencil, possible had a shape and mass as manageable as a brick would be to us-assuming that our muscles were not specially conditioned to deal with it. We fastened a pencil to a brick and experimented. Figure 2 shows the results, compared with typewriting and ordinary pencil writing. With the brick pencil, we are slower and less precise. If we want to hurry the writing, we have to make it larger. Also, writing the passage twice with the brick-pencil tires the untrained hand and arm.